The first period instrument quartet to be selected as BBC New Generation Artists, the Consone Quartet are fast making a name for themselves with their honest and expressive interpretations of classical and early romantic repertoire.

EEEMERGING ensemble since 2016, the Consone Quartet is dedicated to exploring and recreating the classical and early romantic repertoire. The quartet’s success at the finals of the 2015 York Early Music International Young Artists Competition brought them the EUBO Development Trust Prize and a place on the EEEMERGING project. Following this,  the ensemble won the 2016 Royal Over-Seas League Ensemble Prize in London, but also became the first period instrument quartet to be selected as BBC New Generation Artists.

During the three years of support by the EEEMERGING program, the Consone Quartet was able to benefit from residencies but also gave concerts in various places such as Duderstadt (Germany), York (UK), Pavia (Italy) and Ambronay (France). At the end of the three years, they got to record a CD in the Young Ensemble Collection of Ambronay Editions. Their debut CD explores music by Haydn and Mendelssohn, and was met with great critical acclaim as a recording “that instantly leaps out of the stereo at you as something special” (The Strad)

Over the past few years, Consone Quartet has been regularly hosted by the Brighton and York Early Music Festivals, as well as enthusiastically received at prestigious international venues such as Paris Philharmonie String Quartet Biennial, London’s Wigmore Hall, or the REMA Showcase in the Czech Republic. 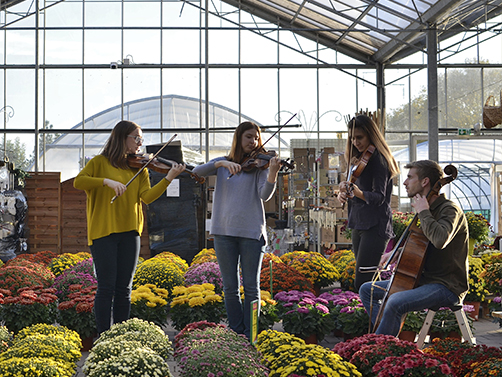 “The Consone Quartet are a young string quartet with a really big future. They play with perfect intonation, tremendous attack, and impeccable historical style. All the four instruments work together with such intelligence and imagination, that I would happily listen to them every day.” Sir Roger Norrington