Other partners and supporters across Europe

Other partners and supporters are linked to the EEEMERGING+ project across Europe. They complete the guaranteed offerings of the co-organisers.

They are institutions that support the project in various ways: forming and informing ensembles, inviting ensembles for concerts, contributing to its attractiveness and influence, finding funds, providing statistics. 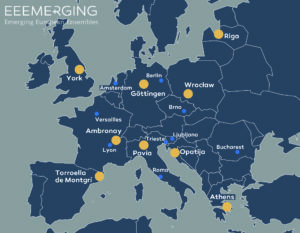 A Soul for Europe – Berlin, Germany